This explosive works was originally established by Alfred Nobel and his partners as the centre of operations for The British Dynamite Company which was established in 1871. The site selected for the company’s works was a remote 100 acre coastal strip on the Ardeer peninsular in North Ayrshire, approximately 30 miles south-west of Glasgow.

The site was initially without proper road access and devoid of basic utilities such as running water and electrical power. However, its development was rapid and in  January 1873 it produced its first batch of nitroglycerine.

Like other plants of its type the operation works was based on several batch operations each of which was carried out in separate huts and facilities spread across the site. Most of these were sunk into the sand dunes which served as protective blast bunds in the event of an accident thereby not allowing an explosion in one part of the site propagate further. As a further safety measure, certain key production areas were built on raised hills in the sand dunes. From this elevated position liquid products could be moved between successive stages of the explosives making process using gravity flow launder rather than electrically driven transfer pumps. Sparks generated accidentally from such pump motor could be catastrophic if they were to contact the explosives. Despite the attention to safety on the site accidents still occurred and when they did they often resulted in multiple fatalities. 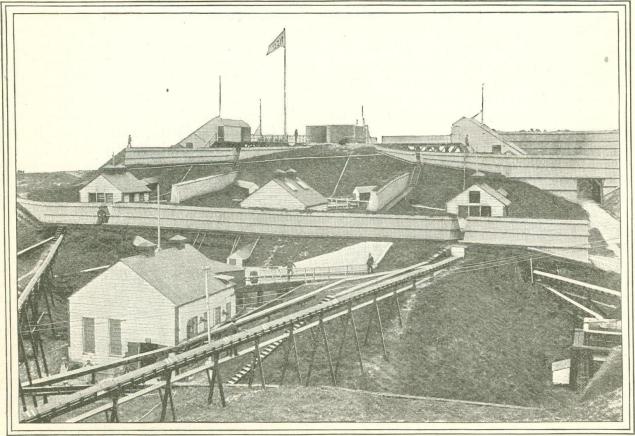 A so called “Nitroglycerin Hill” at Ardeer showing the use of gravity flow launders to transport materials from one area of the site to another. c.1897

As the site grew and became more complex so did the works themselves. To facilitate the easy and rapid movement of bulk materials and products around it a light railway system was installed.

By 1877 the company had re-formed under the title Nobel’s Explosives Company which by 1886 had further transformed into The Nobel-Dynamite Trust Company.

Initial transport of the works products off site was via the sea, with product being manually loaded onto sailing ships on the beach side adjacent to the works. Later, the acquisition of harbour facilities at nearby Irvine provided quayside loading for larger steam coasters. Over the years, a succession of steamers were acquired or built by the company to serve its overseas trade.

After a change in British Law, which revoked a previous prohibition on the transport of explosives by rail, the site received a further boost in 1887 when a branch line of the Glasgow and South Western Railway was laid into the heart of the factory. This link it with the national railway network giving it greater access to internal markets.

By 1902, the factory had grown to cover 706 acres and comprised 450 separate structures within which 1,200 people were employed. Its growth had been assisted by the rapid expansion in its export trade.

Women workers waiting to be searched for “contraband” such as tobacco or matches at the start of a shift at the work. c.1897.

During the Great War the factory was turned over to producing explosives and accelerants for the British Government. While Nobel continued its daily management it became “His Majesty’s Explosives Factory – Irvine”.  At its peak, during the war, the site employed almost 13,000 workers of which approximately 1000 are understood to have been women. By then the site was served by its own station and scheduled works trains to transfer the bulk of its workforce to and from the works and surroundings areas.

Despite its remote location the works was surrounded by defences including a coastal gun battery. The fear of a German U-boat shelling the plant was thought to be a very realistic threat.

The entrance to one of the site’s Ballistite Powder Houses showing a line of either cloth, wooden or rubber safety overshoes for use by workers entering into one of the clean working zones. These had to be worn so as to eliminate the chance of “sparking” off normal hob nail work boots when coming into contact with the work’s hard floors. c.1900

After the war the site order slumped dramatically. However, unlike many other British explosive works it did not close and in 1926 became part of Britain’s re-organised and heavily merged munitions and explosives industry under the newly formed Imperial Chemicals Industries (I.C.I.) Limited.

The site continued to grow and by 1935 it covered 1790 acres. It played a further active and important role, as R.OF. Irvine, during World War II. Explosives and chemical production at the plant finally ceased altogether in the 1980s and in 2002 the break-up of I.C.I saw what was left of the site’s various chemical works pass into the ownership of others. While a small part of the original huge works site still plays host to small local industries most of it now lies largely derelict or has returned to nature.

Obverse: Raised legend around upper half reads * H.M.F. CANTEEN * and around lower half IRVINE . and within the centre field in two lines 1/2 / RATION all within an outer raised border.