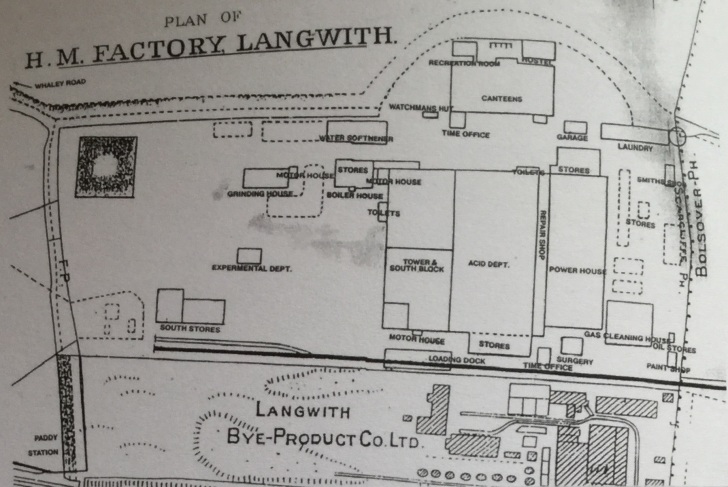 His Majesty’s Explosives Factory (H.M.E.F.) –  Production of the explosives accelerant ammonium perclorate. This was principally used, along with T.N.T.,  in floating mines that protected Britain’s wartime coastline.

In 1915 the British Government decided that the nation needed to produce its own supplies of the explosives accelerant ammonium perclorate. Up until that time it had relied on the import of this chemical from either France or Sweden. France no-longer had surplus production, given its own war efforts, and importation from Sweden ran additional risks from Germany’s U-Boat fleet.

Britain made an agreement with their Swedish suppliers of ammonium perclorate to use their patent manufacturing process to produce the chemical under licence in a new factory to be built in the United Kingdom. An important factor in siting the new factory would be the abundance of an economic supply of electrical power as the manufacturing process was highly energy intensive. The site ultimately selected for the new factory was on a plot of 27 acres of land to the immediately north of the Langwith Colliery’s Coking By-Products Works in North Derbyshire.  The By-Products Works generated a waste stream of producer gas that could be used to fire stream driven electrical generating turbines. The works also made ammonium sulphate which could be used in the production of ammonium perclorate.

Construction work started on the new factory in November 1915. Due to a labour shortage a detachment of 100 soldiers from the Army Labour Corps. were temporarily assigned to the factories construction. Construction progressed slower than anticipated delaying its start-up. The electrolytic section of the new works finally opened in October 1916 and its chemical section opened in June 1917. The site was operated by the adjacent Langwith By-Product Company Limited which was a subsidiary of the Sheepbridge Coal & Iron Company Limited.

A group of workers at H.M. Factory Langwith

Once in operation the factory employed approximately 800 workers most of whom were women. Like other similar purpose build National Factories Langwith was equipped with good social and welfare facilities. These included football pitches and tennis courts, workers locker and changing rooms, canteens and recreational halls plus an on-site medical surgery. Like similar factories Langwith had its own dedicated security staff. The works also had its own dedicated local housing for both its management and some of its workers. Other workers travelled into work each day via local trains. The factory had its own dedicated railway halt.

While  ammonium perclorate was only an explosive accelerant  it was none the less dangerous. During its short operating life two separate flash fires, both occurring in the works dry grinding facility, killed a total of 6 workers, 4 of whom were women.

After the Armistice production at Langwith was rapidly wound down, ceasing totally in 1919. Most of the site’s staff had left by 1920. In its final year it is believed that the site was engaged in the destruction of poisonous gases, generated from other sites in the country as part of the war effort.

From 1921 to 1927 the site of the former H.M. Factory at Langwith remained empty. It was finally purchased by auction in 1927 by the former owners of the site, i.e. the Sheepbridge Company, who demolished the works in 1928.

Today the former site of H.M. Factory Langwith, and the adjacent Coking Works By-Products Plant lie beneath a cover of trees and landscaped colliery spoil on the site of the Poulter Country Park.

Design: Uniface with a plain edge and upper suspension hole

Reverse:  Raised legend in seven lines, within an outer raised border, reads ON CEASING TO BE / EMPLOYED HERE /HOLDER OF THIS PASS / MUST RETURN IT TO / WAGES CLERK / BEFORE FINAL PAY /  IS ISSUED