Royal Ordnance Depot (R.O.D.) – A British Government owned military ordnance supply depot. Originally constructed to act as the United Kingdom’s central facility to store various types of military ordnance (from munitions to cannons) in addition to the repair of small arms. Later in its history it was also used to store and distribute military clothing.

In 1803 an act of Parliament was passed for the purchase of 53 acres in Weedon in Northamptonshire, “for erecting buildings thereon for the service of His Majesty’s Ordnance”. Subsequent land purchases later increased the estate to approximately 150 acres. The Royal Military Depot, as it became known, stretched out along the Nene valley above the village of Lower Weedon, with a barracks for 500 men overlooking the depot to the north, close to the Coventry Road. The Depot’s location, in the middle of England, was strategic in that it offered  a safe central inland position from where the British Army could be supplied in the event of a possible invasion from a growing Napoleonic threat in France. The selected location at Weedon Bec provided excellent transport logistics both by a major turnpike road and via the recently constructed Grand Junction Canal which reached Weedon in 1796.

A mid twentieth century plan of the Royal Ordnance Depot at Wedon Bec highlighting its major transport network links plus its salient features.

Initially the depot comprised 8 storehouses and 4 gun powder magazines. The two-storey storehouses were made of of brick faced with stone. Each being 160 feet long by 35 feet wide and divided into four rooms. One of the buildings was, at a later date, converted into a three-storey military prison containing 121 cells. The adjoining building was used as a military hospital and one of the adjacent buildings housed a chapel. The eight buildings cover a distance of approximately a quarter of a mile with the magazine buildings some 300 yards to the west in a separate walled enclosure. The depot was used for the storage and issue of small arms and ordnance as early as 1809.

The East Lodge of the Royal Ordnance Depot at Weedon Bec which is now home to a visitor’s centre (viewed from the south-west).

In order to move goods quickly into the depot, a spur from the adjacent Grand Junction Canal was cut between the two rows of storehouses. At each end of the main enclosure, two lodges were constructed over the canal, each equipped with a mechanical portcullis. The lodges were both fitted with roof top cupolas, with that on the East Lodge containing a clock. The canal continued within the perimeter wall of the depot towards the magazines. At its terminus was a further smaller building and portcullis which lead into a barge turning basin. The latter was infilled in 1915.

One of the remaining early nineteenth century military canal portcullis gates within the Royal Ordnance Depot at Weedon Bec.

The depot’s original construction included a high perimeter wall with upper patrol walkways. At each of the wall’s four corners were bastions built as sentry lookout posts. These bastions were adapted during World War II for machine gun posts to be used against air attack.

There is little recorded history of the depot between 1810 and 1858, although, it is known that it functioned as a General Stores and Clothing Depot before 1858. Some troops were quartered in the depot as well as the barracks up to the time of the Crimean War.

The magazines, which were built at the same time as the depot, comprise brick buildings with very thick walls and a small, high window at each end. Each block of buildings that was used to store gunpowder was separated from the next by a wide earth bank. Over 1000 tons of gunpowder was stored in the magazine at any one time.

Gunpowder was delivered to Weedon by barge, where it was packed into barrels and boxes and re-issued. The coming of the railway brought a standard gauge rail connection into the depot but it also posed a problem as the new main line ran between the depot and the Grand Junction Canal, severing the branch canal into the depot. To overcome this, a portion of the line had to be physically removed using fish plates, rails and chains; to allow the barges to pass into the depot. This was made more dangerous by the fact that this was one of the busiest stretches of line in England with hundreds of trains passing through at speed during the day and sharp curves leading away from it in both directions.

Three spacious white brick buildings, later known as the Pavilion, were built at the same time as the depot, they were originally built to house the Depot’s Governor and his two Principal Officers. These buildings were later earmarked to be used as a residence for King George III should the threatened Napoleonic invasion take place.

The Main Ordnance Office was built in 1885 to conform with the other buildings on the site.

In March 1889 one of the buildings used as a Small Arms Store was destroyed by fire. A large brick receiving shed, complete with railway lines and turntable inside, was built just after this period for the storage of wagons.

During the Boer War (1899 to 1902), the strain on the Army Clothing Depot at Pimlico in London was extreme and to alleviate this a ninth large three-storey brick building was erected in 1902 alongside the canal, between the depot and magazine. This played a very important part in the first World War, when a large proportion of Kitchener’s Army was clothed from here. During this period three large corrugated iron sheds (no-longer standing) were erected to augment the accommodation. The clothing depot remained in use until 1921 when, owing to the space being required for the storage of small arms, the buildings were taken over for this purpose and the stocks of clothing were transferred to the Royal Ordnance Depot at Chilwell in Nottinghamshire.

In 1903, additional workshop accommodation was needed at the Weedon Depot and a large three-story brick building was erected. This housed the R.E.M.E. Workshop, Carpenters Shop and Preservation Plant. In 1925,the Machine Gun Section from Woolwich Arsenal was moved to Weedon. The Chief Ordnance Officer’s quarters known as “Ordnance House” was built in 1926 on a hill to the north east of the depot along with three sets of officer’s quarters close by.

In 1930, the Army Bicycle Section was transferred from Didcot to Weedon and the depot became the Central Ordnance Depot for small arms, machine guns and bicycles.
From 1922, the barracks formed the home of the Army Equestrian School, the Pavilion being the Officers’ Mess and quarters. Five new stables were erected in the field to the east of the barracks. Some of the finest horses in the Army were stabled here at that time.

Just prior to World War II, improvements were made to the internal rail network to facilitate the loading of stores into railway trucks. The depot lines were reconstructed and a large reinforced concrete platform with a roof was built in 1939. This was wide enough to permit vehicles to run up the ramps at each end and facilitate loading and un-loading of the railway trucks. With the increased amount of traffic during the war this proved to be invaluable.

A mid-twentieth century view of the Royal Ordnance Depot at Weedon Bec showing its internal rail system alongside the central canal (viewed from the north-west).

The original depot area had been paved with granite “setts” which were prepared and laid by prison labour. In 1939, a start was made to take up these setts which were replaced by concrete, making a leveler surface to facilitate the operation of vehicles.

In 1940, it was decided that the magazines should once more function for the storage of ammunition all be not for gun powder, for which they had originally been intended. The magazines were served by an old access road from the north. This was resurfaced and furnished with a new security entrance at the west end of the enclosure. The magazine functioned as an Intermediate Ammunition Depot until 1942, holding bulk ammunition for issue to heavy anti-aircraft sites and equipment ammunition magazines (E.A.M.). After 1942, this function was transferred elsewhere and the buildings reverted to storehouses.

World War II brought with it a great influx of clerical work and the existing office accommodation was quickly found inadequate. In 1941, a new office block was built at the south east corner of the main gate. This housed the majority of the clerical staff throughout the war and for some years later. A brick built decontamination centre was also erected on the south side of the depot and the casemates under several of the storage buildings were adapted as air raid shelters.  In addition, two external surface air raid shelters were added at the eastern end of the magazine, outside the perimeter wall.

The barracks were taken over with an ordnance store located in the Equestrian School stables. The Royal Army Ordnance Corps also occupied the barracks and had quarters at a hutted camp nearby.

The influx of weapons and stores was so great during this period that several relief depots were opened in the vicinity and during 1942, Old Dalby became a shadow depot of Weedon. During World War II Weedon reached its peak of activity in the early months of 1944 when “Landing Reserves” and “Beach Maintenance Packs” were prepared in readiness for “D” Day.

During 1944, heavy stock transfers were made to the Central Ordnance Depot (C.O.D.) at Bicester and between 1945 and 1947, the Small Arms Provision Branch was moved there from Weedon which was re-titled 99 Ordnance Sub Depot. Under this designation the Depot functioned until 1952.

After the war, huge quantities of small arms and machine guns were returned to the depot and the major function was to hold “returned stores”.

By 1952, Weedon once again became a C.O.D. under the direct control of the War Office and from 1952 to 1957, it played its part in the re-equipping of the new Army with modern weapons. In October 1957, the Small Arms Provision Branch was transferred outside of Weedon which then became a Technical Stores Sub Depot, this later being changed to Technical Stores Depot.

The decision to close Weedon and transfer stores to Donnington was announced in January 1961 and the depot finally closed on 28th February 1965. Following the departure of the Royal Army Ordnance Corps, Weedon Depot was occupied by Government departments for a further 18 years. The surrounding areas of the Military Estate were sold in 1969 for re-development.

An recent aerial view of of the central part of the Royal Ordnance Depot at Weedon Bec (viewed from the east).

In 1983, the depot and magazine was sold into private hands. The central part of the Depot now hosts a variety of private workshops, stores, offices and a book shop plus visitor’s centre.

The following YouTube presentation gives a good overview of what remains of the Weedon Depot today, along with its history. 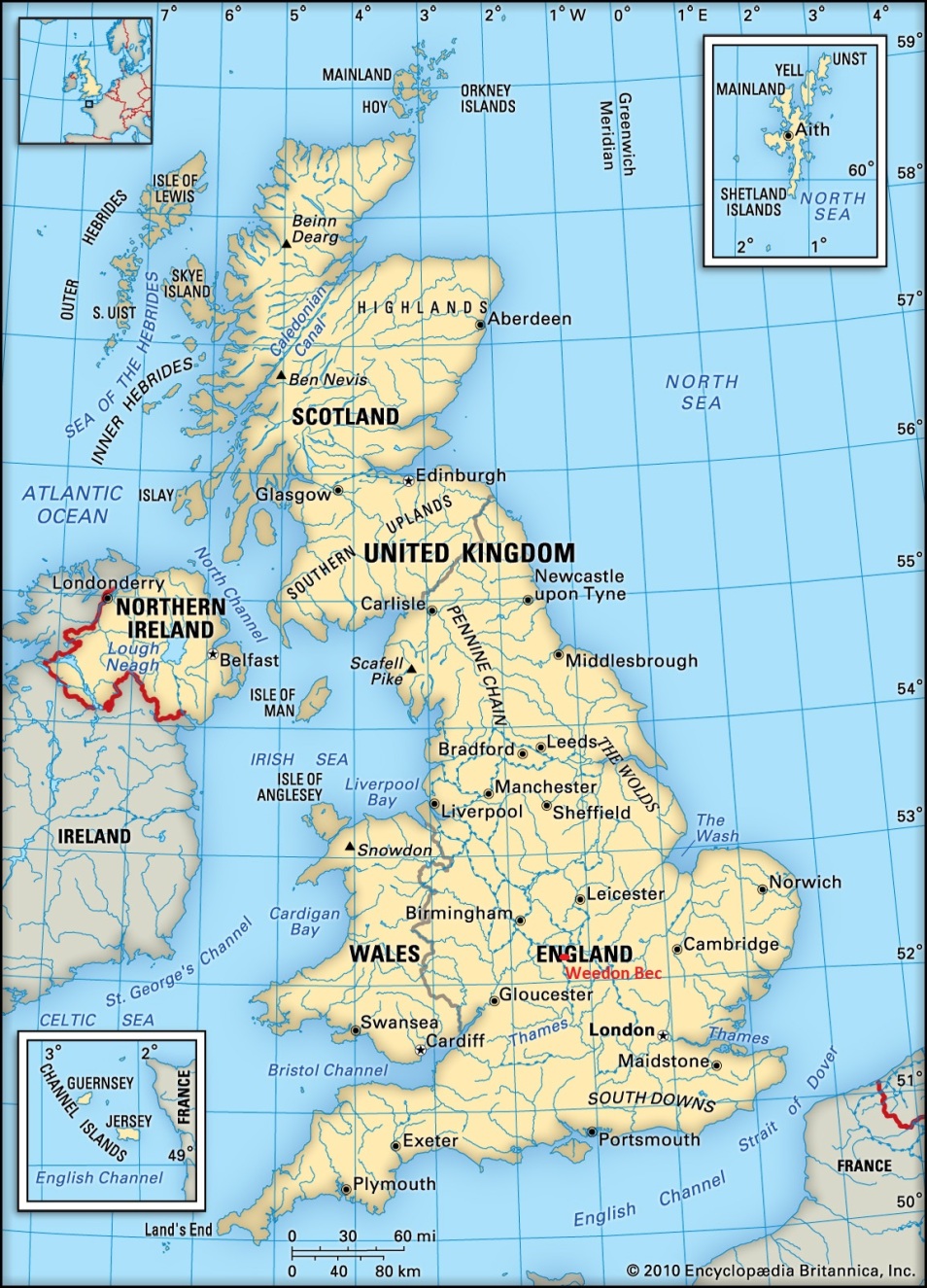 Design: Uniface with a plain edge

Obverse: Incuse legend in two lines in lower half of field reads M.S.D / WEEDON (Note 2) above which is an incusely stamped identification number 93 with a “broad arrow” symbol placed above (Note 3) .